Fortunately, the bank that advertised for a teller was on Linda Lubitz’s bus route.

Lubitz, the founder and president of Miami-based Lubitz Financial Group (now called MEIRA Wealth) was 20 years old, going to school and needed a job with flexible hours — that she could get to by bus.

“We only had one car,” Lubitz recalls. “That’s how I got into financial services.”

She was hired, became a teller and 18 years later opened a brokerage subsidiary for the same bank, AmeriFirst Federal. Lubitz had an aptitude for the business. When the brokerage job ended in 1986, she joined legendary financial advisory Harold Evensky’s firm in Miami as Managing Partner and became a CFP®.

“This is a profession where you can make a direct difference in people’s lives,” Lubitz says. “That’s the number one thing that’s exciting about it. I love analytical work and puzzles, and when you’re working on someone’s financial life, there’s always a puzzle.”

After five years, she parted amicably with Evensky and opened her own RIA. 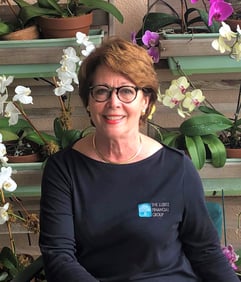 Lubitz looks for clients who are what she calls “amiable delegators.” They have to be willing to leave the daily management of their finances to Lubitz’s firm and, she adds, “We have to like them.”

Planning is a priority—and is priced accordingly. “The clients who value financial planning,” Lubitz says, “are those who are willing to pay for it.”

Sometimes money isn’t even Topic A.

“I just had three meetings with long-term clients,” she says. “None of the conversations were about money. Most were about family concerns.”

Clients who come to Lubitz are often in transition, dealing with events like divorce, retirement, a sudden inheritance, or a death in the family.

“The vision they had of the future is now cloudy,” Lubitz says. “When people go through dramatic life transitions, pheromones seem to be released, which causes the sharks to circle. Those people can sense the vulnerability of grief, fear and uncertainty and want to take advantage. And they do.”

In the early ‘90s, Lubitz met Norm Boone, who owned Mosaic Financial Partners, an RIA in San Francisco, at a workshop for advisors. They clicked professionally and co-authored an article in the Journal of Financial Planning on the need for using Investment Policy Statements in ERISA/401k plans. They later created software that made it easier for advisors to provide clients with the statements and formed IPS Advisor Pro to market and sell the program.

After around eight years, Lubitz and Boone started dating and married in 2007, keeping their separate businesses in Miami and San Francisco. Boone mostly needed to stay in San Francisco because of his children, so Lubitz became bi-coastal, spending two weeks a month on the west coast.

“At first, I was terrified my clients would leave if I weren’t around,” she recalls, “but they didn’t. But it is hard to grow a business if you’re only there for half the month.”

Lubitz says it didn’t bother her, however. While relatively small by industry standards, her firm’s $240 million in assets under management is certainly respectable. “I like having a small business,” she explains. “We’re able to help people without a lot of bureaucratic layers and can make a good living.”

Boone was more interested in expanding and merged his firm in 2018 with Private Ocean, an RIA in neighboring Marin County. The couple had sold their software company to fi360 in 2013, and this year Boone is stepping back from day-to-day duties at Private Ocean while Lubitz is preparing an internal succession plan at her firm. The coronavirus pandemic brought the couple closer together. Boone moved to Miami last year and Lubitz says it’s the first time in over 20 years they’ve spent more than four weeks together at a time and it’s been great!

“I tell them to trust your gut, trust your instincts,” she says. “And I tell them that no job is too small to do. If you’re doing something, you’re learning something. If you know how things operate and get things done, whether it’s in the back office or anywhere else, you could be way more powerful than that senior person you’re reporting to.”

We are saddened by the passing of Junxure co-founder Ken Golding.
LEARN MORE →

The holidays are upon us, and I want to take this moment to express my gratitude for so many meaningful moments and exch...
LEARN MORE →

Customization is not a fad, and why RIAs should seek expert support.
LEARN MORE →